As we roll into 2019 today, like always, I take a look back and remember all the ones in my family that are missing and aren't rolling ahead with us. We had our first Christmas and first New Year without Nikki and the moment my thoughts turn to her or her picture pops up on my computer, I begin to cry again. The memory of the last look she gave me is burned into my soul and Bob and I both miss the routine and her constant companionship. She took a piece of our hearts with her and I sometimes wake up late at night, thinking I heard her tag from her collar clinking on the heating vent in our bedroom. 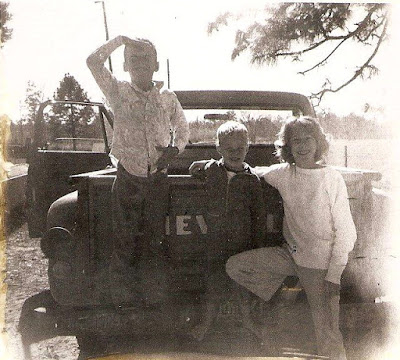 Out of all the driving training, getting me slow down was the biggest challenge for him. Except when people loaded up into the bed of the truck and we headed to our camp on the river. Even at the age of 12, I knew it was extremely dangerous to hit a pot hole going too fast when my younger siblings were in the back. I loved riding in the back too. It's funny - today, I can't stand all the dust from the back country roads, but back then, we didn't have a care in the world about it. Sand & dust flying all around us - the gritty stuff in our eyes and teeth - because who doesn't smile when they're riding in the back of a truck? Sometimes, if he was going slow, Pawpaw would let us ride on the tail gate - he rarely dropped one of us kids, but if he did he would stop and wait for offender to catch up - the one who obviously hadn't been listening when they were told to hang on in the first place.
Pawpaw was loving, but at the same time he was tough - he would tell you once, sometimes even twice, but after that, you suffered the consequences of your pride.
To this day, I can still drive any vehicle with a stick shift and a tractor.
I still have the problem of driving too fast, but I pay my dues when I do - or at least when I get caught. We had the best Christmas, as Bob and I taught our two grandsons how to drive our 4-wheelers. The labels on the bikes state, "no operators under the age of 16". We scoffed at that. As our Grandsons begged & pleaded to be allowed to push the bike from low to high gear for more speed, and wanted more control of the throttle so we could go airborne over the whoop-di-dooes, I laughed to myself as I imagined Pawpaw had probably experienced all the same thoughts now spinning in my head; "not an ice-cube's chance in hell, kid" & "I have no desire to die today".
I can't wait until my Grandsons visit again, so I can continue to teach and play with them. My son told me they're still talking about all the fun they had with Gramma and Grandpa. I hope they cherish these memories we are making long into their own adulthood, as I cherish my memories of my own Grandparents today.