A Singing Invitation to the Kids

Ever since my first experience with getting up early to hear the purple martin dawnsong, I have been hooked on it.  I committed to getting up at least one early morning to enjoy it during each season.  Today was that day.  I got up at 3 AM, grabbed the biggest mug I have and carried my coffee out to the porch, using the little flashlight on my cell phone....which has to be the handiest thing they've ever put on a cell phone, that can only be discovered quite by accident.
This morning's early rising would also help serve the purpose of driving away or at least keeping the Great Horned Owl at bay.  As I settled in, I almost laughed out loud in the cool, velvety darkness at how loud the bullfrogs were at the pond, over 75 yards away.  How DO they manage to escape all the predators when they're making so much noise? If you're wondering where the Milky Way is right now, you will need to get up at 3 A.M. to see that one too - it's directly overhead at this time of year.  I love the challenge of trying to capture pictures of it. 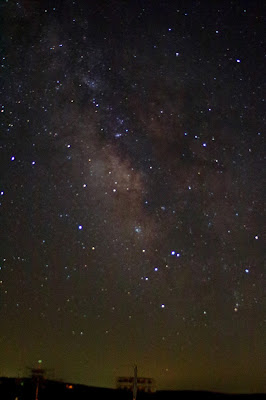 A few scurrying noises around my deck made the hair on the back of my neck stand up.  I can be pretty brave in daylight, but the idea of a snake, a large spider, or some other critter accidentally bumping into me in the darkness can sometimes make me feel like I'm 2 years old.
A few of the male martins were being noisy and were loudly performing their mating calls with the clicking at the end, while still in their gourds.  It's no wonder that an owl or any other predator can easily find them at night...silly birds. And what makes them think that's what their lovely lady wants to hear at 3:00 A.M. anyway??

By 3:30 A.M., I had heard only 1 bird start the dawnsong.  He zipped out of his gourd and he was up, up, and away from the colony quickly.  At 3:45 A.M., the neighbor's rooster was crowing.  I thought, "If that were my rooster, that would be his last day to crow at 3:45 A.M.".  But that must have been my martins' queue because within minutes of the rooster crowing, the rest of the Dawnsong choir joined in.  As I scanned the yard and racks carefully watching for the owl in case she tried to take advantage (we put out solar yard lights last week), a huge number of male martins exited and rose quickly in the darkness, chortling as they rose - the only indication I had that another one was in the air. 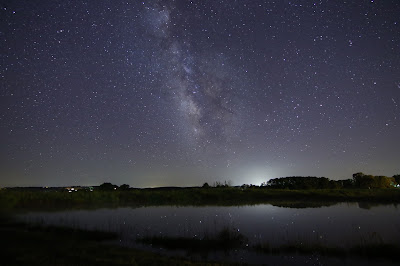 It's amazing how loud each martin sounds as they circle high above and sing the darkness away. As the stars started to fade and my human eyes detected dawn around 5:12 A.M., the first martin returned to the racks and proceed to womp on another male that had tried to sneak into his place while he was out gathering fresh troops. Apparently, there are no time constraints for when territorial battles can be fought.
I took this video a couple of years ago of a male martin performing the dawnsong on my racks and it is still the best video I've been able to capture of it.

Even though I've witnessed the end of the song and their returns to the racks several times now, that part never gets old either.  Close to 60-65 martins falling out of the sky, dropping into the colony, almost all at once is a fantastic sight.
For anyone that missed it, via the PMCA - the purpose of the Dawnsong:


"Gene Morton's dawnsong theory was that adult males perform it after their mate is committed and their paternity is assured - it's safe, at that point, to invite sub-adult birds to join the site, so the senior males can have extra offspring via the sub-adult females.  So dawnsong will not be performed until green leaf stage of nest building"

"Dawnsong is a unique set of vocalizations performed by adult male martins during the predawn hours of spring while flying high above their colony sites, or while perched nearby. It is a loud, continuous series of chirps presented in a syncopated series of about seven to nine notes repeated over and over. Each male flies his own path in slow, wide circles about 500 feet up, singing his own unique song. It is estimated that the sounds from a morning of dawnsong transmit to about 100 cubic miles of air volume."
(Hill, James R., Purple Martin Dawnsong, For Attracting Martins!, pg. 3.)"
http://www.purplemartin.org/main/Vocalization.html

It must be working - as of last Saturday, May 13th, I have 3 sub-adult males.  Welcome back kiddos! 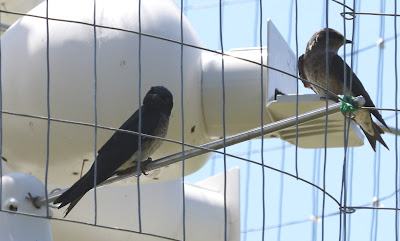 May Flowers, Martins and Mysteries

It is either 'feast' or 'famine' in Missouri when it comes to rain. This spring, we seem to be in a state of deluge.  With the breaks in the rain, my martins were able to get out and find food. The last 2 days of rain though were just too much for them and they came knockin'.  Luckily, I had a few crickets left and a few dozen eggs.
It appears my 'regulars' remember the drill.  The banded female below wasted no time being the first up to the buffet. 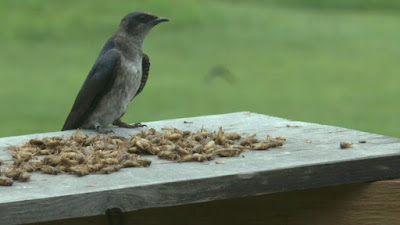 At my house, you best not be late when the dinner bell rings though. 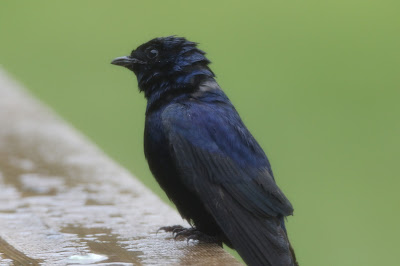 I haven't been able to get an accurate count with the rain keeping most inside their gourds, but I'm estimating there are approximately 50-60 pairs here right now. 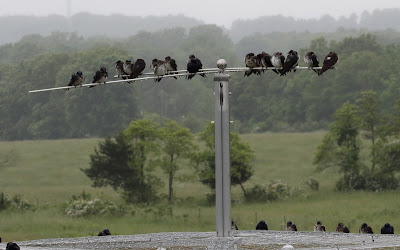 In fact, yesterday evening at 7:00 P.M. when the last weather system finally broke, I stepped out to see if my colony was doing okay.  I started to worry when I only counted 5 birds on the racks.  Finally, at 7:50 P.M., they suddenly started dropping out of the sky and into their gourds.  They had taken advantage of the brief amount of sunshine and gone to hunt and gather.  It's okay, I'm not offended they prefer live, squiggly stuff over my eggs and crickets.
I awoke today to a loud, raucous noise in my south yard - the sun was out and it was already above 60 degrees!  Yay!  NO crickets or eggs today! For the first time in 4 days, I was able to just cook a couple of eggs for myself.
As I waited for the weather to warm further, so I could do what I dreaded most today, I noticed my red clover was blooming. 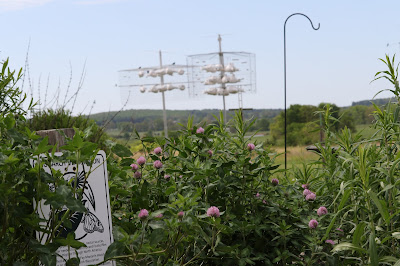 And my homemade bird baths were filled with fresh rainwater.  Bob and I have finally found a use for all the landscape rocks. 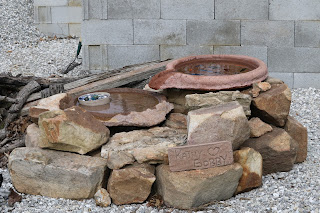 After putting it off as long as I could, I started lowering my racks and checking each gourd, hoping upon hope that I wouldn't find what I feared most - dead, starved martins.  I breathed a sigh of relief after lowering the first 2 racks and not finding any.  Such a relief.  Then I lowered the third rack and was shocked at the condition of the wire.  My mind couldn't put 2 and 2 together to figure out how this happened.  And wouldn't you know it - I haven't started up the game cameras yet. 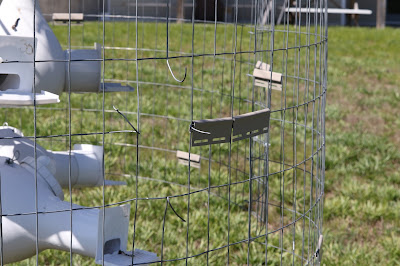 The top 3 broken wires in the picture were bent out and the one on the bottom was bent down and in, with its tip behind another wire.  "Ok, WHO taught my Great Horned Owl to use a set of wire cutters?", I pondered to myself and laughed uneasily.  Racoon?  No way - a racoon would have climbed up the pole and already been inside the cage, wreaking his havoc. Owl? Hmmm - could / would an owl hang on the cage and vigorously work over the joint where these wires were pulled apart?  Why not just fly up under the cage, instead - it would take a lot less energy to do that!  Would she really wear down her beak gnawing on the wire cage, when there was an easier approach?
I called Bob out to look at it and the ends of the wire where they were separated.  Click on the pictures below to see better closeups.  Lightning maybe?  But check out the picture above....the wires are bent in different directions.... 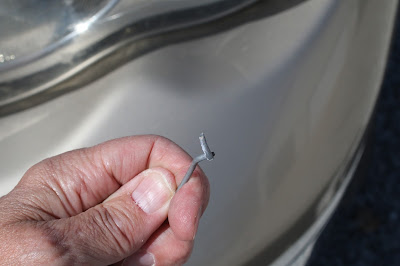 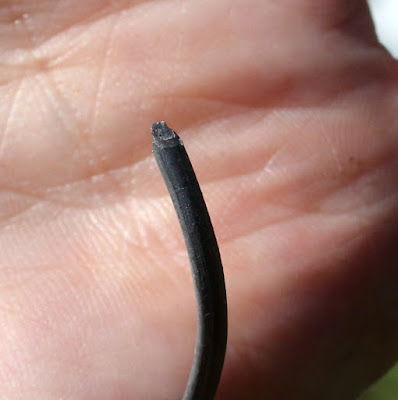 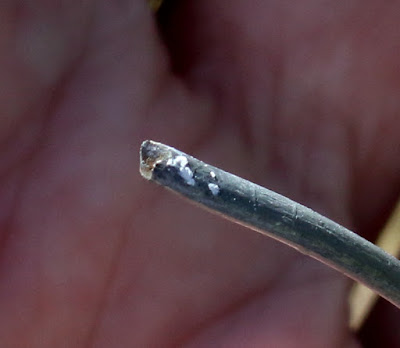 So, other than the big hole in the cage that must have been created by some super-evolved Chupacabra animal here on Gobbler's Knob, all was really otherwise very well.  I found 5 eggs in a gourd on this same rack - but I doubt they're viable, since they were very cold and there were no martins around most of the day today to incubate them.  I lightly marked them with a marker, so I can keep track of their progress...or lack thereof.
I'm not normally a 'fraidy-cat, but dang....
Ok fellow sleuth-bugs - so what was it?